The architecture of these underground rooms is evocative of a grand, 13th-century, Gothic cathedral. It is one of Chillon’s most unique features.

Originally used as storage for supplies and weapons, it was turned into a prison in approximately 1290 by Peter II of Savoy, nicknamed ‘the little Charlemagne’.

The dungeon is made of untouched stone from the island the castle was built on and Gothic vaults made by medieval construction workers. The entire building sits on these stone pillars, which will soon be 1,000 years old. It’s a real piece of art!

It’s certainly the part of the castle that has sparked the most imagination: countless legends began their stories here, perhaps the most famous being Bonivard, who was immortalised by Lord Byron as the hero of his 19th-century poem, The Prisoner of Chillon. 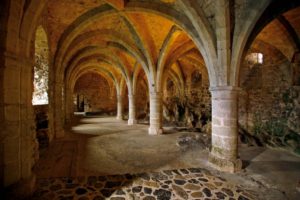 Through the castle entrance, you will find four courtyards; beginning with the ‘lower courtyard’, which would have been the busiest; up to the Castellan’s Courtyard; the Courtyard of Honour, reserved for the use of the counts – later the dukes – of Savoy and their entourage; and finally to the Curtain-wall Courtyard.

Today, these areas are regularly used for performances and events. 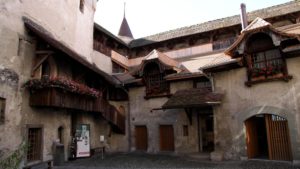 First Courtyard
The first courtyard was the focal point for castle services. Originally, it was not as large as it is now; the current layout was established after an earthquake in 1584.

Second Courtyard
The passageway between the first and the second courtyards was originally much narrower. It was widened in 1836 to fit canons through. In the Middle Ages the castle administrator, a Savoy officer known as the castellan or constable, lived in the buildings surrounding the courtyard. The keep, built in the middle of the castle in the 11th century, is the oldest building still standing at Chillon.

Third Courtyard
The third courtyard, known as the ‘Courtyard of Honour’, was overlooked by the Savoy family’s private apartments.

Fourth Courtyard
Finally, the fourth courtyard, known as the ‘Curtain-wall Courtyard’, was entirely designed to defend and control the old road: thick walls, narrow openings (arrow-loops and loopholes, for example) and defensive architecture such as hoardings, machicolations and the glacis (or defensive apron slope).

Today, these areas are regularly used for performances and events.

The castle has three formal great halls, whose windows look out over the marvellous Lake Geneva landscape.

The Savoy family used them for sumptuous banquets, while the Bernese also dispensed justice in them.

Take a look around our great halls: the Aula Magna, the Castellan’s Dining Hall and the Domus Clericorum

Make your dinner, reception or concert an unforgettable experience at Chillon Castle by hiring out one of our prestigious rooms! 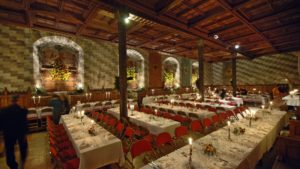 Aula Magna
In the Middle Ages the Savoys used this room as a reception, banquet or feasting hall. It is also where they hosted their vassals and dispensed justice. Named the ‘Aula Magna’ or ‘Aula Magna Inferior’ (large lower room) it became the milling room after a mill and press were installed in the 13th century, during the Bernese era. From 1839 it was renamed the ‘Hall of Justice’. The black marble columns and lakeside windows date from the 13th century. The ceiling and chimney date from the 15th century.

Castellan’s Dining Hall
Restoration work on this room at the beginning of the 20th century gave it a medieval look. As with most of the castle walls, here distemper paint has been used based on models dating back to the late 13th century. The oak columns are 13th-century originals. The coffered ceiling and chimney date from the 15th century. This room is in the part of the castle that was formerly used as a residence, which explains the large 13th-century windows. In the Savoy era, it was used as the castellan’s dining hall. During the Bernese era, it was split into two: one part was a kitchen, the other a living room.

Domus Clericorum
In the 13th century the ‘Domus Clericorum’ (the clerks’ abode) housed the administration for the Chillon domain and the bailiwick of Chablais across two floors. This building either collapsed or was demolished in the 16th century. The clerks’ room on the lower floor was entirely restored in the first half of the 20th century. Between 1947 and 1948, the wall paintings were reproduced based on remnants of the 13th-century decoration. The ceiling painting is a remake of further decoration found in the torture chamber.

Here we find a comfortable, plainly decorated bedroom with a large four-poster bed, heating, en-suite bathroom and even running water!

This room was used as a bedroom in the Middle Ages and probably served the same purpose in the Bernese era.

The Bernese decor painted on a white background and adorned with plants, fruit and animals, dates back to the early 17th century. 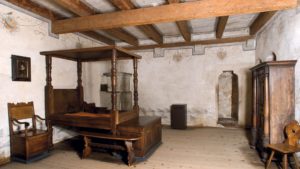 The most extravagant room was obviously reserved for the Count of Savoy.

The 14th-century murals depict a wealth of medieval animal symbols.

The Camera Domini (the lord’s bedroom) was where the counts and the dukes of Savoy slept. It was fashioned in the 13th century under Peter II of Savoy and then completely refurbished in the 14th century, when the painting work you see here was also completed.

The spiral staircase, built in around 1336, gave the lord of the castle easy access to the sentry walks above or his private chapel below. 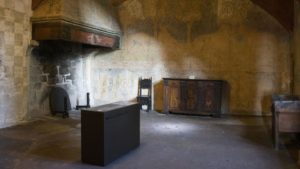 Remnants of the wall murals depict animals surrounded by lush vegetation. The ceiling is adorned with lilies and crosses. The latter, which allude to the Savoy coat of arms, were cut from sheets of tin.

This room, lit by large windows overlooking the lake, houses a magnificent walnut wardrobe dating back to 1590 and a ceramic stove bearing the Lutry town crest from 1602.

This room was reserved for the Savoy family in the late 14th century. It was known as the ‘Camera Nova Juxta Magnum Pelium’, or ‘the new room next to the large stove’.

More recently, it has also been known as the Committee Room as it was where the committee for the Association for the Restoration of Chillon Castle met in the 1930s. This association, founded in 1887, was responsible for restoring and running the castle with support from the Canton of Vaud until 2002, when it was succeeded by the Chillon Castle Foundation. 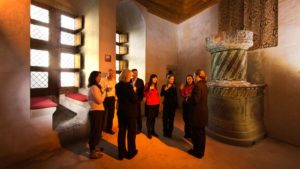 The chapel is the jewel in Chillon’s architectural crown.

The 14th-century paintings make it one of the rare religious buildings in the canton to have escaped the iconoclastic zeal of the Reformation.

Saint George’s chapel was the private chapel of the counts and, subsequently, dukes of Savoy.

Visitors can take their time learning all about the history of this place of worship – reserved for the counts and dukes of Savoy – as well as the frescos that adorn it, with the help of an audiovisual screen.

The chapel fell into disuse during the Reformation, used only as a granary and later a powder house during the Bernese era. It reverted to its original function in the 19th century, transitioning into a place of worship for prisoners when the castle became a cantonal prison. 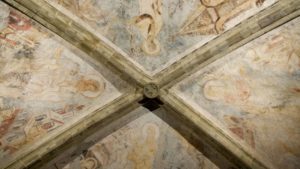 The wall recesses date from 1250 and the Gothic vaulted ceiling to the late 13th century. The original decorations on the walls and ceiling date back to the early 14th century. From 1914 to 1916, the paintings were systematically scraped off, reinforced and restored, particularly those on the walls which had seen the most damage, mostly due to water leakage. They were part restored between 1985 and 1995 and most of the repainting work from 1914 to 1916 removed.

Despite their fragmented appearance, these paintings were designed, on the commission of Amadeus V, to be enjoyed as a scholarly whole on the central theme of Jesus Christ. They are split to fit the chapel’s architectural features, with the Old Testament (with the exception of John the Baptist) on the vaulted ceiling and the New Testament on the walls.

The lake side of the castle was a princely residence dedicated to all the luxuries of the court.

The mountain side, however, was a veritable stronghold complete with watchtowers, sentry walks, double ramparts, hoardings, machicolations, moat and turrets… no expense spared when it came to warding off an enemy attack. Our workshop and tour package gives you a dual-pronged look at the castle spanning two themes: everyday life in the Middle Ages and how to build and defend a castle.

This is a fun tour and visitors are encouraged to join in with the various elements of their chosen theme through movement, sight, smell and touch using objects, images, odours, fabrics and more…

Pick a theme and book your guide using our online form! 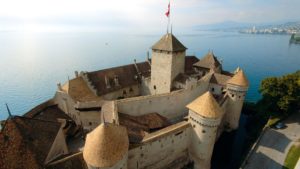 The displays in this room, now dedicated to Peter II of Savoy (1203 – 1268), showcase the dynastic power of the Savoy family and their domain. This was used as a guest room in the Savoy period.

Two exhibits help us better gauge firstly the influence of the so-called ‘little Charlemagne’ in Europe throughout the 13th century and, secondly, the expanse of Savoy territory over time.

The lower parts of the walls are painted a greyish white (1587). Above, there are three very significant remnants of the 13th-century decor. The partition was rebuilt in 1921. 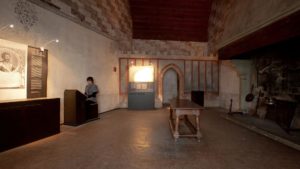 30 kilometres might not seem like much, but a lake and an international border stand between the two castles of Chillon and Ripaille, locations previously linked by a shared history – that of the House of Savoy. Today, both are cultural and historical focal points, which is why we have chosen to build new bridges and strengthen our collaborative ties.

We have partnered up to work on a project entitled ‘Chillon and Ripaille: two jewels of Savoy civilisation’ (Chillon et Ripaille : deux joyaux de la civilisation savoyarde). The project is backed by funding from the Interreg V-A France-Switzerland programme and involves two parallel branches launched on 8 June 2011: an exhibit on Peter II of Savoy at Chillon, and another dedicated to Amadeus VIII at Ripaille.

Combined offer: Chillon and Ripaille
Visitors get free entry to one of the participating castles upon presentation of a ticket to the partnering organisation.

To coincide with the arrival of our audiovisual offering in September 2010, the weapons room in the keep was given a backdrop of sounds from the battlefield. Situated almost at the exact centre of Chillon’s rocky island, the keep probably dates back to the 11th century.

As both a refuge tower and a symbol of power, the keep was also used as a guard tower, provisional residence, storage and, more recently, a prison and powder house. For safety reasons, the door to the keep, which is located high above the ground, could only be reached using a ladder or the drawbridge.

We do not know when the keep was first extended, but it was further extended at the beginning of the 14th century to reach its current height (approx. 25 metres).

Historically, only the first floor was habitable. Stairs were added during the 20th-century restoration work on the keep, providing access to the top level, which has a 360° view over the castle and the surrounding area. 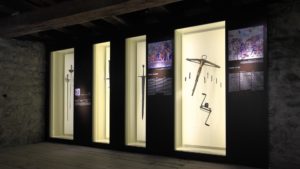 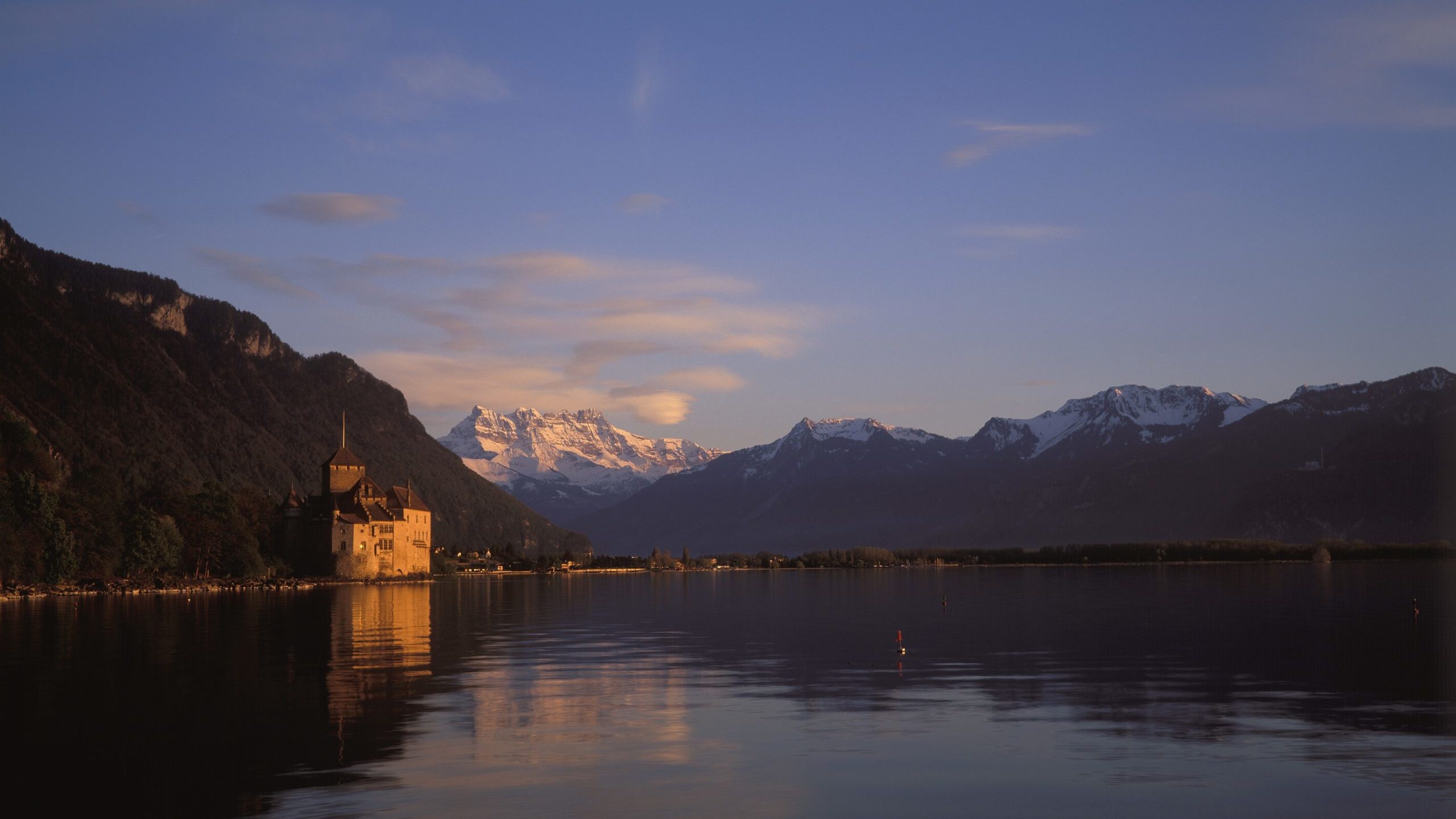 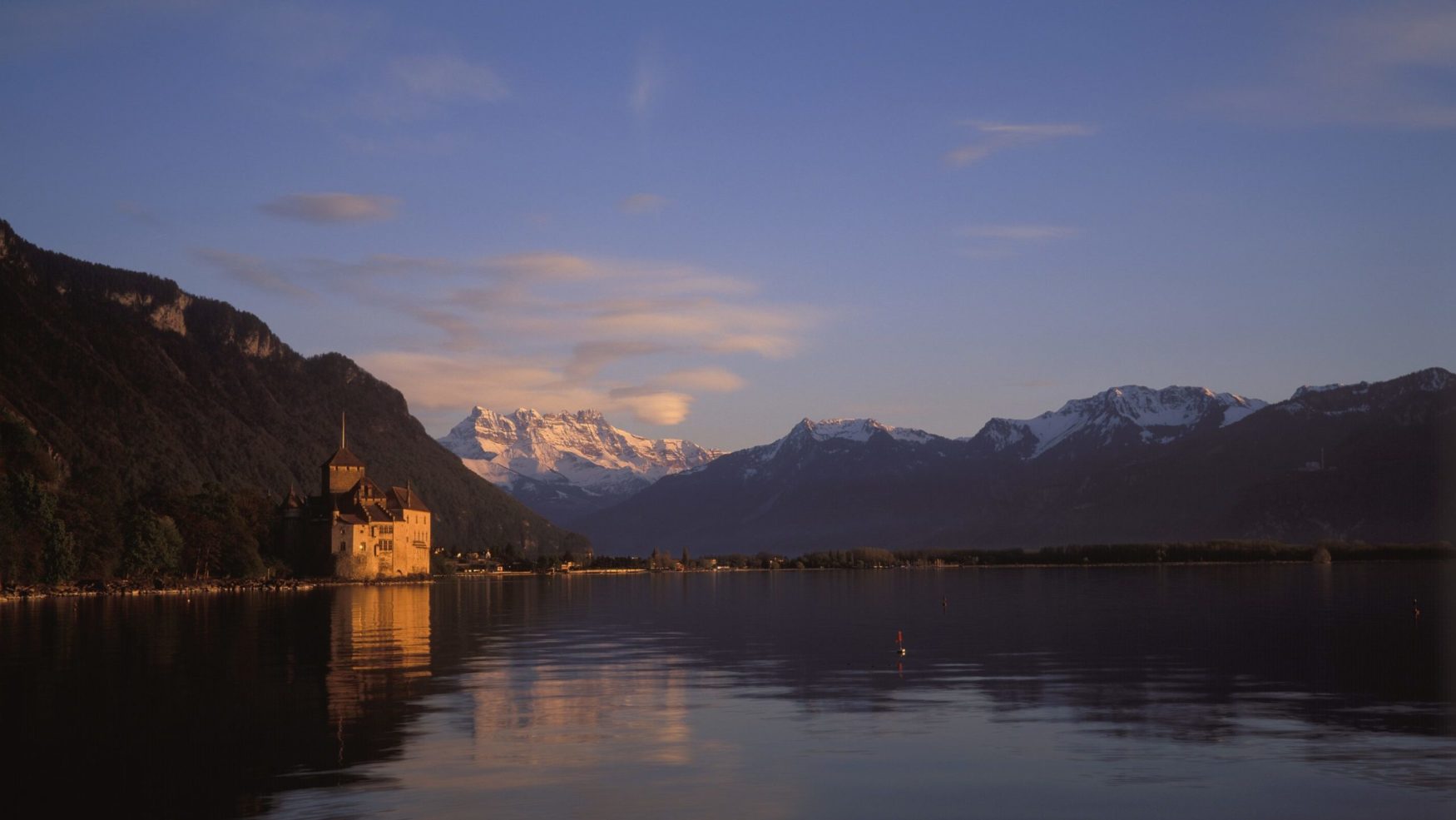 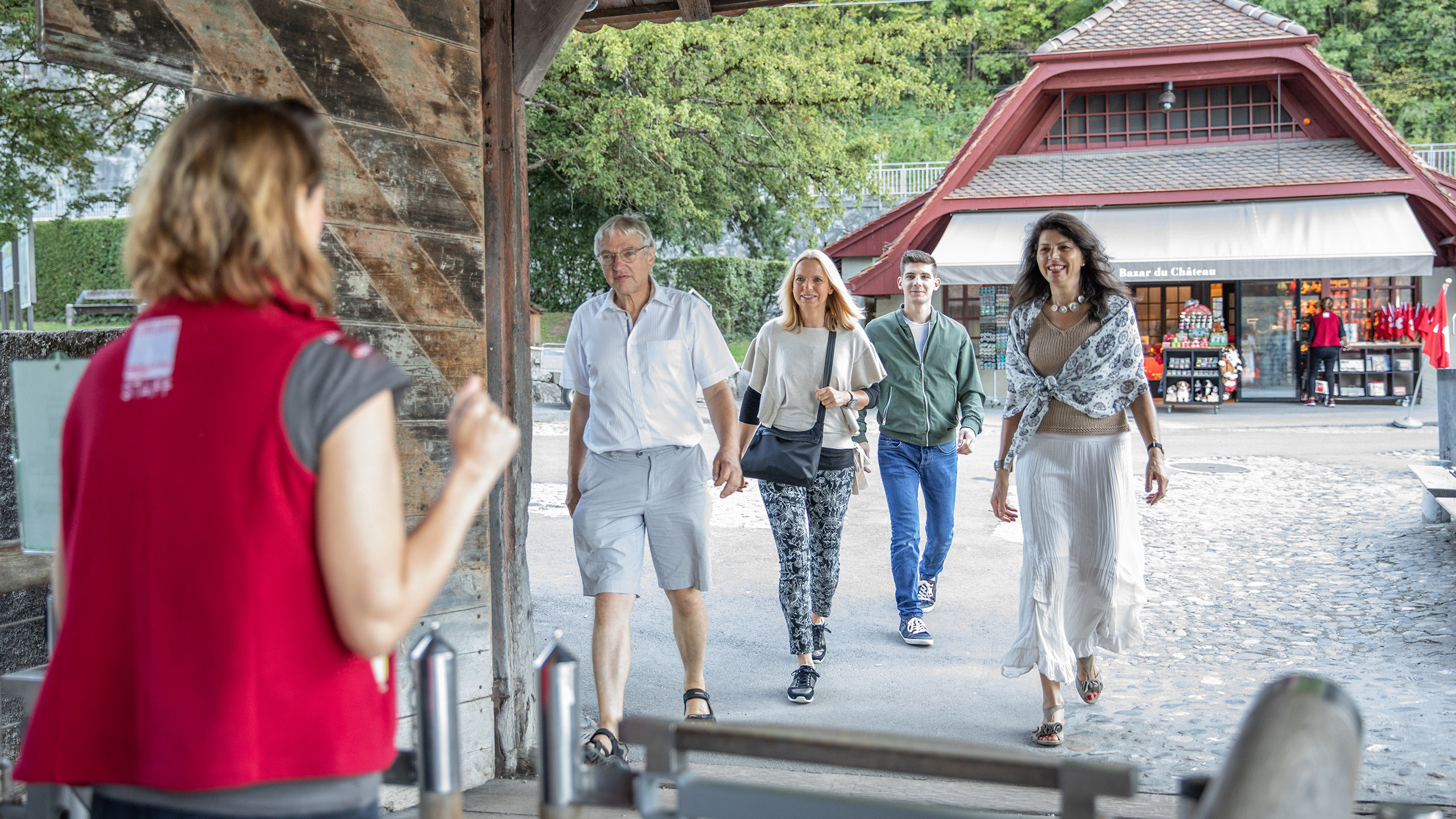