Did you know that Chillon has its own vineyard?

Part of the ‘Lavaux’ appellation d’origine contrôlée (controlled designation of origin), this 12,500 m2 vineyard is spread blissfully along the shores of Lake Geneva, just 10 minutes’ walk from the castle. Each year, its grapes produce a Grand Cru known as the Clos de Chillon.

The white wine is made using the chasselas variety, and the red from a blend of the gamaret, garanoir and merlot varieties.

Vineyards have been in operation on the castle grounds for centuries. In 1260 Peter II, Count of Savoy, acquired a large vineyard in the Perrevuit region, part of the parish of Les Planches, which was dedicated to Saint Vincent, patron saint of winemakers. Records of Chillon’s domain in 1314 include various details on this vineyard’s expenditure.

A quick glance at maps of Veytaux in the 18th century shows almost all the land between the village and the lake was already taken up by vines. Part of this was already named Clos de Chillon. Crop scourge, urbanisation and economic crisis all led to this communal vineyard being gradually abandoned in the first half of the 20th century. 2,000 m2 of the chasselas vine survived until 1965. This was when the heirs to the Châtelanat family estate donated the vineyard to the Association for the Restoration of Chillon Castle to help preserve this exceptional monument. The Association decided to replot the land and purchase an additional 2,000 m2. The first plot was replanted in 1968. In 1977, it was expanded even further, eventually reaching its current size. With that, the area’s winemaking trade was reborn and Chillon began producing its own wine under the ‘Lavaux’ appellation d’origine contrôlée.

Nowadays, the Clos de Chillon spans two large plots of land, totalling 12,000 m2: one on the banks of the lake where the chasselas, gamaret, garanoir and merlot varieties are grown; and another beneath the railway lines, which is especially reserved for the chasselas variety. Chillon’s designated winegrower passionately and devotedly oversees all of the work on the vines year-round using an environmentally friendly, state-of-the-art technique known as Integrated Production of Wine (IPW). This is monitored by our partner Badoux Vins.

For centuries there was a wine cellar and a wine press at Chillon. Since 2011, the Clos de Chillon has been reconnecting with its past. Some forty-odd barrels were set up in the first of the castle’s cellars, not far from the prison where François Bonivard – the protagonist of Lord Byron’s famous poem The Prisoner of Chillon – was chained up.

The Chillon Castle Foundation has been working with Badoux Vins since 2010 to restore the art of winemaking in the castle cellar to its medieval former glory.

In 1908, Henri Badoux founded Badoux Vins. Henri Badoux was an innovator with a profound respect for tradition; he recognised not only the abundance of chasselas grapes in the region, but also soon discovered that certain estates could produce red wines to rival the greats. Badoux Vins built their reputation on the indisputable recognition of their now-famous ‘Aigle les Murailles’ grape variety. Badoux Vins has proven its expertise and demonstrated an exceptional understanding of the terroir and its wealth of resources.

The county of Vaud – home of winemaking and gourmet cuisine – is a region of pure, epicurean delight and Chillon is a certified Vaud wine tourism partner. This certification recognises professionals from across the region in the fields of hospitality, catering, wine and overall good taste who understand the value of a top-quality tourism and cuisine offering. Fruit of the Canton of Vaud, the Vaud wine tourism certification has built a network of venues where you can discover, share and (above all) taste produce from across Vaud!

The castle’s wine tourism offering has gone from strength to strength. Find out more about Chillon’s two flagship wine tourism projects below. 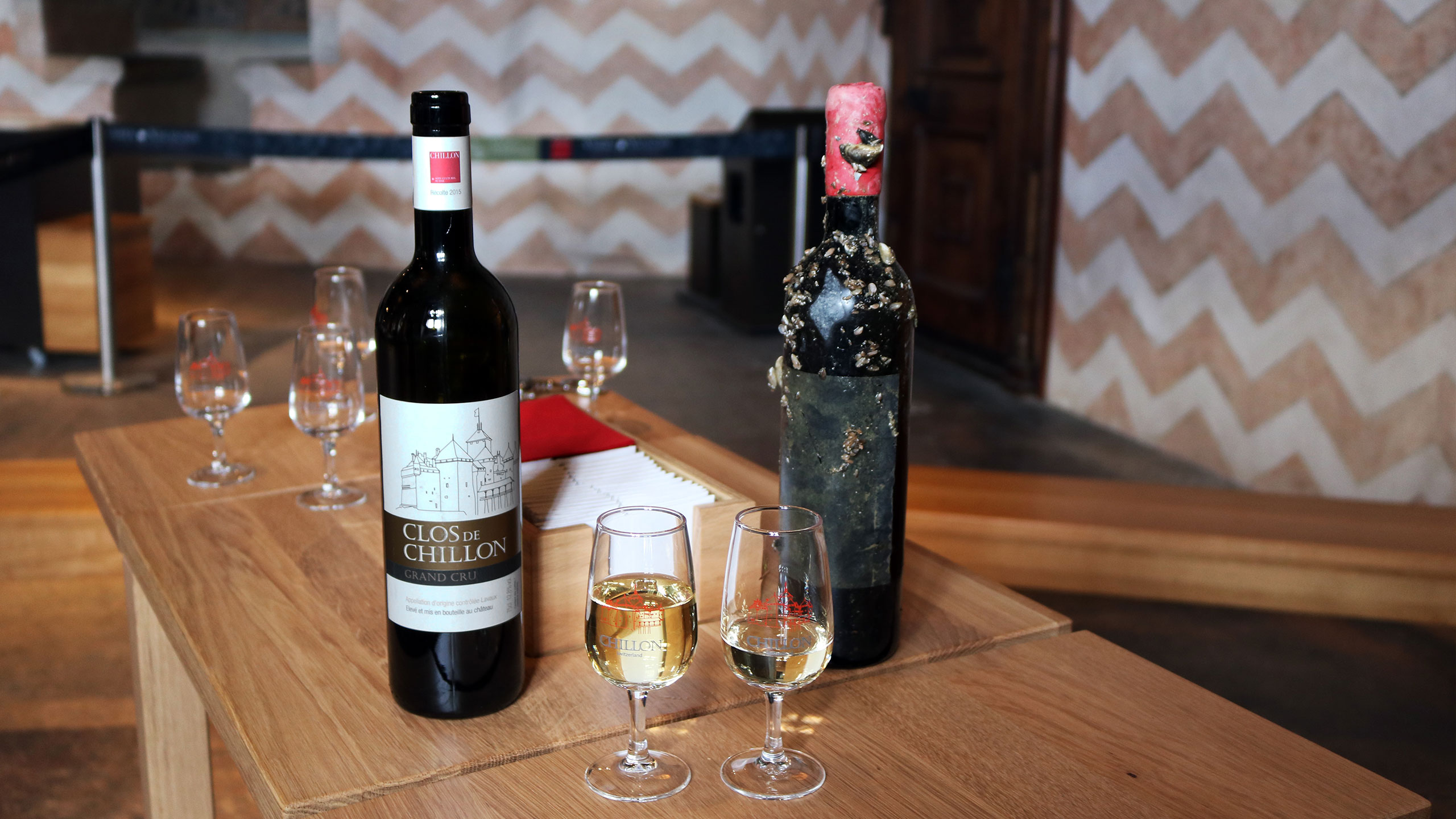 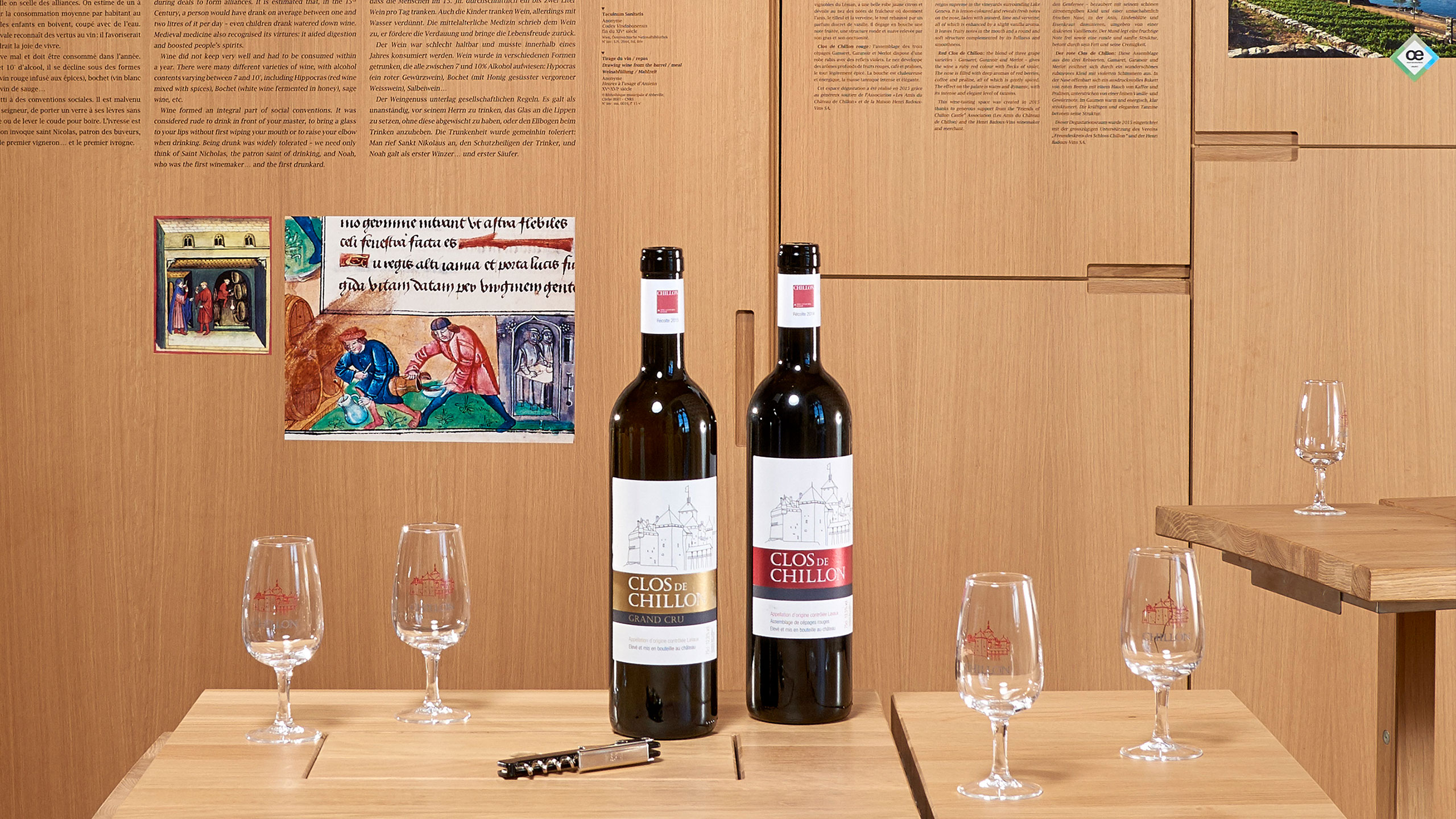 The Clos de Chillon – available as a white wine made using the chasselas variety, or as a blend of the red gamaret, garanoir and merlot varieties – is produced in the castle vineyard. This Grand Cru is aged in barrels in the castle cellars and bottled in the first courtyard by Aigle-based Badoux Vins. The chasselas grape variety is typical of the Lake Geneva region. It is a white table grape with small, round, golden seeds.

The 10,000 or so bottles produced here per year are exclusive and can only be sampled and purchased at the castle.

In a beautiful lemon-yellow colour with a splash of golden tones, the Clos de Chillon has a bouquet of inimitable fresh notes, mainly of aniseed and fresh lime tree. A hint of lightly diluted verbena brings out the sweetness of the honey notes enveloped within.

All these aromas are combined with discreet, elegant, fresh vanilla undertones. Lightly smoked, fruity notes are released in the mouth; its round, soft structure enhanced by its viscosity and smoothness.

In a delectable shade of ruby red with hints of purple, the nose is filled with a rich bouquet of deep aromas such as red berries, with notes of coffee and praline, all draped over a backdrop of delicate vanilla and spiced aromas.

On the palate it is straightforward, warm and dynamic with intense, elegant tannins to strengthen its structure. It is skilfully aged in oak barrels, rounded off with some finishing spiced touches.

You can really taste the harmonious fusion between the gamaret, garanoir and merlot.

Part of a special selection skilfully put together by Badoux Vins, the Reserve is on sale at Badoux Vins but is only available for purchase at our museum shop once our Clos de Chillon is out of stock.

A selection of chasselas from Lavaux’s terraced vineyards, registered as a UNESCO World Heritage Site in 2007.

The Chillon Castle Foundation Reserve is a holy trinity combining the tradition of the chasselas grape variety, the prestige of the Lavaux vineyards, and the renowned quality of Badoux Vins.

In a rich, clear, scintillating lemon colour, the Chillon Castle Foundation Reserve’s bouquet is one of white flowers and white-fleshed fruit, with mineral undertones. It has a fresh, crisp mouthfeel. Its character and body, stemming from its invigorating structure, are enhanced by its pleasantly mineral and sophisticated finish.

The blend of pinot noir and gamay gives this wines its dense, deep black cherry colour.

It has subtle notes of cherry, forest floor and spices. On the palate it is straightforward, warm and dynamic.

This wine’s harmonious structure is perfectly rounded off with complex, refined aromas.