The Aula Nova is home to a display of chests. The collection, only some of which is on display here at Chillon, consists of 80 pieces. Most of the pieces date from the 17th and 18th centuries, but some date back to the Gothic, or even Roman, era. The other rooms in the castle house various pieces of furniture such as tables, chairs, credenzas and even carved doors.

The Association for the Restoration of Chillon Castle was founded in 1887 with the aim of restoring the monument and creating a museum to illustrate the various periods of Vaud’s history. Ever since, the collection has been enriched by purchases, donations and bequests.

The castle owes some of its most beautiful pieces of furniture to Vevey-born architect, Ernest Burnat (1833-1922). In 1889, as custodian, he defined the furniture acquisition policy. His tour de force was, without a doubt, the purchase of a chest made by Alexandre Mayer, a cabinetmaker from Swabia, and the artist behind several masterpieces in Valais toward the end of the 17th century.

In 1912, the castle architect and first archaeologist for the Canton of Vaud, Albert Naef (1862-1936) had six copies of chests belonging to the Valère Basilica (Sion, Valais) made. It is clear they were meant to furnish the great halls, judging by their 13th-century manufacture date, which coincided with the castle’s first construction phase in around 1260.

This statue, sculpted from a single block of limewood (or linden), depicts George of Lydda, a fourth-century martyr.
Legend has it that he rid the town of Silene (Libya) of a winged monster, allegory of the devil.

As the patron saint of chivalry, the saint is depicted in accordance with 15th-century stylistic canons: stood on top of the dragon’s stomach, beardless and dressed in a full suit of armour. His shield is decorated with a cross and he probably held a lance in his right hand.

The sculpture’s origins are unknown, however, it was designed to be viewed from the front, because its back and sides are not decorated. The saint is looking downward, also suggesting it was supposed to be placed high up. There are still some polychrome fragments visible on his face and armour: red, black, silver and gold plating.

Chillon chapel was dedicated to Saint George by the House of Savoy in 1351. The statue was acquired by the Association for the Restoration of Chillon Castle in 1895 to mark the occasion.

The clock, named ‘Louis Crot’, is the first port of call for visitors when they cross the Chillon Castle drawbridge. Its large face can be seen from the square tower, perched above the east entrance. The paint work dates back to the 1540s and the Bernese occupants added the coat of arms in 1776.

The first mechanism was made by master clockmaker, André de Morges, who installed the upper level of the tower in 1543. A drive shaft cutting through the exterior wall powers the hands on the facade. Here, around the same time, an anonymous artist drew a clock face with roman numerals – testament to the clock’s unique design. A bell was added in the attic in 1583. The clock soon gave the building its name, ‘the clock tower’.

The bell is one of the last in the canton to still have its original wrought iron yoke fastenings, making it a considerably significant heritage item. In 1897, castle archaeologist and architect, Albert Naef, declared the mechanism out of order. He contacted Louis Crot, a clockmaker from Granges-Manand, who recommended replacing it with a more modern device. The Technical Commission supported his verdict and decided to preserve the old instrument as a museum item. That same year, a new clock fit with cabinet and accessories was designed and installed in the original clock’s place. The 1543 mechanism was moved to the entrance building, where it can still be seen today. It is an extremely rare vestige of timepieces in the Middle Ages.

Located next to the entrance to the monument, the Chillon Castle watch tower houses a 16th-century bell at its top. It used to work in conjunction with a nearby clock. Having not undergone any recent restoration, the instrument was examined by a specialist in 2013.

42 centimetres wide and 45 centimetres high, when struck, the bell rings out a G note. Created in 1583, it bears no trace of the name of its founder. It was designed a year before a violent earthquake hit the Chablais region and Chillon castle hard. After this disaster, the watchtower underwent numerous repairs. Therefore, we do not know if the bell is in its original location or if it was moved during this work. It is decorated with a frieze that is often found as a decorative motif on 15th- and 16th-century bells in French-speaking Switzerland. A text written in red paint covers it in part, reading ‘FELIX BERARD 1896’. This was probably the name of a roofer or carpenter who worked on the tower at that time. The bell ringing system consists of a damper lever and a hammer that hits the bell at its base. Although still on site, the device no longer works and requires restoration. It is one of the few bells in the canton of Vaud that was not equipped with a ball bearing during the 20th century but has kept its original fixing system, which makes it a significant piece of heritage.

A joint purchase between the Cantonal Museum of Archaeology & History of Lausanne and the Chillon Castle Foundation, this automaton offers an insight into what the castle looked like before the archaeological excavation and restoration campaigns of the 1890s. It is usually exhibited in the museum, in the ‘Vaud history’ section but every two or three years it is moved to the castle and resides in the Coat of Arms Hall for a few months.

This exceptional piece from the late 19th century is the work of the Vaudois watchmaker Edouard-Gabriel Wüthrich. Like many of his contemporaries who were inspired by Lord Byron’s poem The Prisoner of Chillon, the artist depicted Genevan prisoner François Bonivard‘s captivity in Chillon castle.

‘Chillon Castle’ is a mechanical and musical work of art, which offers a complete tour of the castle through moving mechanisms on both its facades. Complex watchmaking movements power around one hundred figurines, reenacting an attack on Chillon Castle by troops from Geneva and Bern, as well as the release of Bonivard in 1536. Barred windows give a view of the inside of the rooms, in particular, scenes of torture in the prison.

Initially this automaton was displayed on a cart which made it easy to transport from town to town. This is how it was exhibited at Beaulieu square in Lausanne and at the Vaudois Cantonal Exhibition in Yverdon in 1894.

The automaton was purchased thanks to generous support from the Circle of Chillon Friends, the Cantonal Museum of Archaeology & History, and the Chillon Castle Foundation.

Stove with Lutry coat of arms

From the end of the 19th century, the excavations undertaken at Chillon Castle made it possible to exhume many fragments of stoves made of glazed and embossed face tiles, some dating back to the 14th century. In the meantime, several complete specimens – of varous types and origins – were acquired to furnish the castle. This exceptional stove was added to the collection in 1888, after having spent more than two centuries in Lutry town hall.

Built in 1602 to heat the town council chamber, it consists of a Nialin stone body and a tower with a crowning of catelle tiles. Its manufacture is particularly well documented since we know the names of the mason and potter who worked there: Amaudruz from Lutry and Henri Baud, from Freiburg.

The stove was severely damaged and relegated to a secondary room in Vaud City Hall in the mid-19th century; however, local scholars agreed on its historical importance and the Association for the Restoration of Chillon Castle acquired it in 1888. It was first installed in the Castellan’s Dining Room. It stayed there for 50 years before being moved to the Camera Nova when the room was refurbished for the Association’s Committee meetings. The stove was equipped with a cast iron heating element in the tower and heat registers on the outside by stove fitter Marius Grognuz.

The shape – a stove with a rounded rectangular front topped with a column – was common in the 17th century. The lower part is decorated with a sun accompanied by six stars and a shield bearing the Lutry coat of arms, while the column is covered with polychrome motifs painted at an angle on a green embossed background. In the centre is the city’s red and white coat of arms held up by two putti. The inscriptions ‘Lutry’ and ‘Winter’ appear under the turrets, and the year 1602 appears in two places.

This stove is the oldest example preserved in its entirety in the Canton of Vaud, and the oldest specimen dated and attributed to Fribourg.

Formal chest depicting the story of Adam and Eve

This piece of furniture was made in 1691 by the sculptor Alexandre Mayer. The quality of its sculpted décor is testament to its decorative purpose, hence the name ‘formal chest’. In addition, it is designed to be kept in one place, unlike the domed-lid chests which were used as luggage.

From 1888, Ernest Burnat (1833-1922), an architect and member of the Technical Commission, acquired historic objects for Chillon Castle. Among his selection were two 17th-century pieces of furniture: an armchair from Aargau and this chest from Valais.

Several stylistic elements pinpoint the latter to Alexandre Mayer’s workshop, most notably the three ‘flamed’ frames, which are typical of the sculptor. Originally from Swabia, he first lived and worked in Broc, before moving to Chablais in Valais. The coat of arms and the initials of governor Joseph Jost and his wife Maris Schwick place the origins of this piece of furniture in the town of Monthey. Alexandre Mayer made several formal chests for governors of the town, five of which we have acquired.

The three sculpted reliefs depict the story of Adam and Eve. In the first frame, God creates Eve from Adam’s rib. In the second, the Temptation plays out under the Tree of Knowledge and the serpent. Finally, in the third, Adam and Eve are expelled from the Garden of Eden after having eaten an apple from the tree, which God had expressly forbidden. 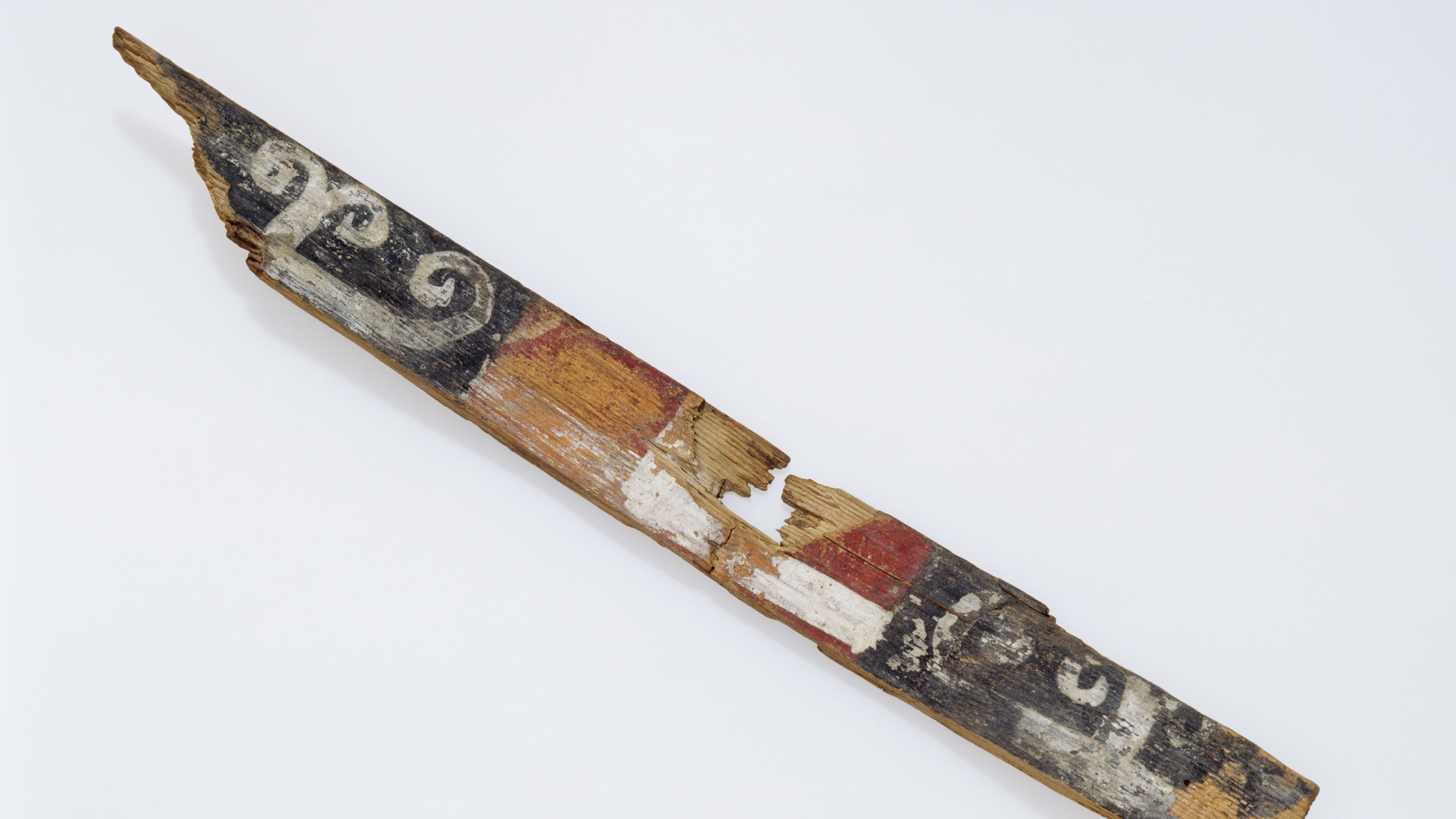 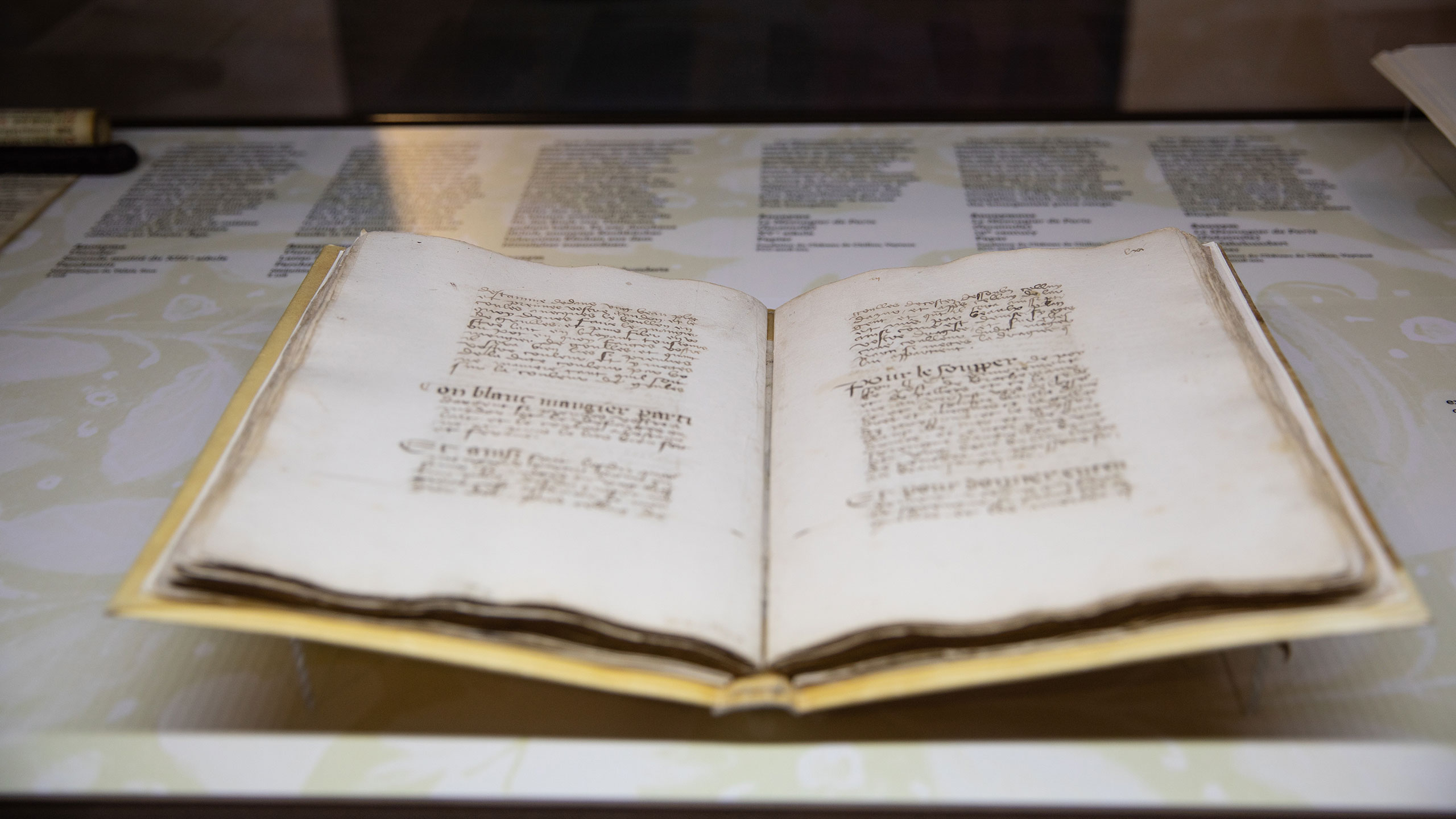